Volumes of research have been written about Millennials, with much more to come as this giant group transforms adulthood. And as of late, Gen Z is having its time in the spotlight. Baby Boomers, many of whom are in the midst of retiring, are also getting plenty of attention from researchers, particularly in the field of aging and longevity. (Sorry Boomers, you're getting old!) But what about Gen X? Why is this generation too often squeezed out of the conversation?

It doesn’t help being sandwiched between two large and flashy generations. Paul Taylor and George Gao of Pew recently summarized Gen X’s struggle to stand out of the crowd: “In most of the ways we take stock of generations— their racial and ethnic makeup; their political, social and religious values; their economic and educational circumstances; their technology usage – Gen Xers are a low-slung, straight-line bridge between two noisy behemoths.”

But even if this group isn’t as flashy as Boomers and Millennials, Xers are at a critical juncture in their lives -- they are in leadership positions at the workplace while in support positions for their children and parents. Yes, Xers have full a plate.

Family, Work, and Not Much Else

Gen X is arguably in the midst of the most stressful lifestage. Sure, adolescence is tough, but Gen X, born between 1965-1980 and mostly their 40s and early 50s, are getting hit on all sides. According to the landmark study, “Hacking Longevity,” which investigated how three generations (Silents, Boomers, Xers) approach aging and fulfillment, Gen X is far more stressed out than their older counterparts. Asked to rank their current level of stress on a 1-10 scale, 34% of Gen X chose an eight or higher, compared to only 20% of Boomers and 10% of Silents. A similar level of stress shows up in another recent study, “Generation Nation.” According to this research, 29% of Gen Xers feel “very” or “extremely” stressed, compared to only 11% of Boomers. 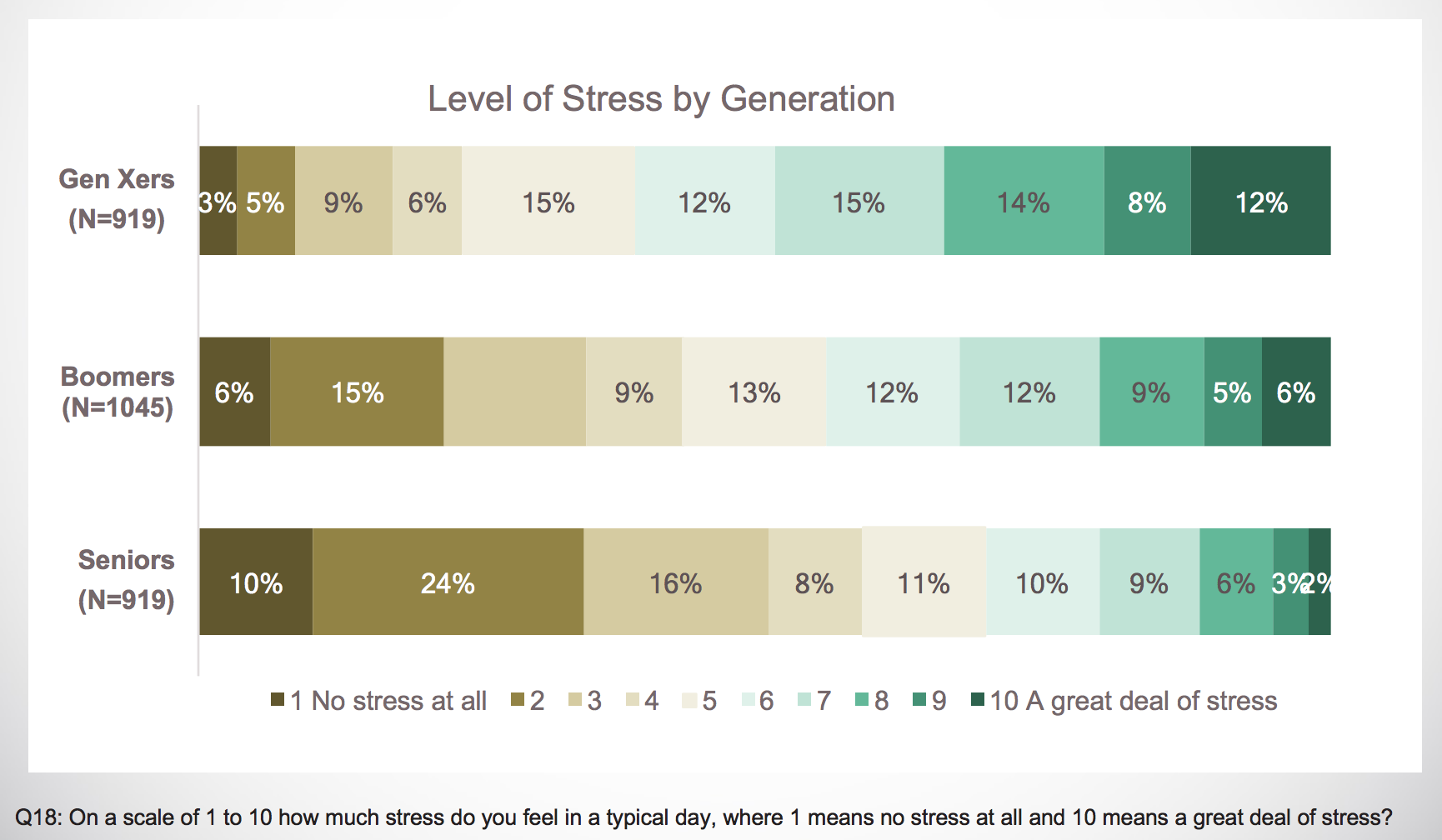 *Chart is based on data from "Hacking Longevity"

Asked to choose words to best describe themselves in “Hacking Longevity,” 16% of Xers chose “busy,” compared to only 10% of Boomers . A sizable 9% of Xers chose “struggling,” exactly twice the number of Boomers. Similarly, Xers also described themselves, much more than the other generations, as “hectic,” “overwhelmed,” and “chaotic.”

So why is this group so on edge? And, is this feeling generational, lifestage-based or both? Well, Xers’ kids are growing up and Xers’ parents are growing old. Retirement isn’t coming anytime soon; so, they’re the new sandwich generation, still pounding the pavement while putting up with parents and progeny. More of this cohort feels as if they don’t have time for themselves, particularly for maintaining a consistently healthy lifestyle or to socialize outside their family. Compounding this intersection of stress and selflessness, this is a generation that puts family first. According to “Generation Nation,” 80% of Xers (more than any other generation) enjoy spending time with their parents. And a full 87% of this generation agrees that family is “the most important thing in my life.” 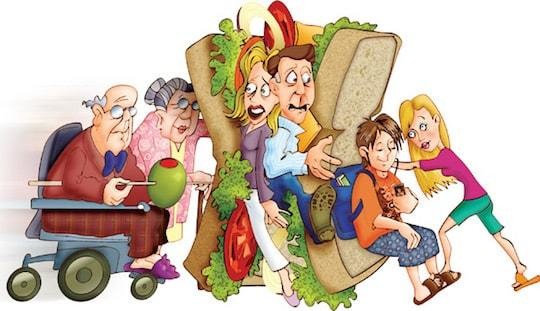 Not surprisingly, the premium Gen X places on family is reflected in their behavior. According to “Hacking Longevity,” nearly half of all Xers spend some time each week caring for their parents. A full fourth of this group spends more than five hours each week in this role. In fact, 28% of Xers are currently involved in their parents’ healthcare decisions, and of these, 45% are their parents’ primary caregivers. That means that members of this generation are often the ones who are now searching for new meds, housing options, and technology that can improve their parents’ quality of life. And, as they take on this role, they’re no doubt imagining what their lives will be like when it’s their time to need help and their children will likely be their caregivers.

According to Lori Bitter, CEO of Business of Aging and author of “Hacking Longevity," “Gen X appears to be at a crossroads -- they’ve mastered ‘adulting’ but they likely haven’t attained the work status they deserve as the Boomer generation continues to hang on. They are diligent, focused on raising their own families, and taking on caregiving responsibilities for their parents. In many ways, they are the new 'sandwich generation.' This is creating a maelstrom of stress that leaves Gen X looking and sounding a bit worn down at a relatively young age."

So Xers are caring for their parents while still raising kids of their own. About half of this cohort says they spend more than five hours each week caring for a child. More so, three-fourths of Xers spend five hours or fewer each week socializing with friends. A full 20% don’t see any friends throughout the week, almost twice the rate of Boomers and Silents.

“Gen X is at a challenging intersection in their lives," said Bitter. "The good news is that we’re seeing a couple of key inflection points emerging in the lifestage map -- and Gen Xers are progressing toward what we are calling 'Me Time.' They’ll begin to see the busyness of life subside and begin to revisit old interests and find new ones, particularly focusing on their own health.”

Family might be the most important thing in Xers’ lives, but nothing stresses them out more than money issues. Even though they’re in their 40s and 50s, many are still paying off student loans. And don’t forget the mortgage. And saving for their kids’ college. And. And. And!

Xers’ “debt stress” also shows up in “Generation Nation,” which found that nearly half (47%) are concerned about the total amount they owe. It’s not surprising then that 71% of this generation is worried that they won’t have enough money for retirement. The fight to get a firm grip on their financial future is cohort-related: a product of being raised in the “Greed is Good” era of the 80s, but trying to make a mark in their careers amidst the 2008 Recession.

Rod Griffin, director of public education for Experian, recently analyzed the financial situations of each American generation for USA Today. His conclusion: Gen X is currently in the toughest spot. “They’re saddled with the highest average mortgage debt of all the age groups at $231,774. Many probably bought homes at the peak of the housing bubble, including expensive houses in higher-income neighborhoods that boasted good schools for their kids…This group also has a high rate of late debt payments at 0.54% and the most average non-mortgage debt at $30,334.” 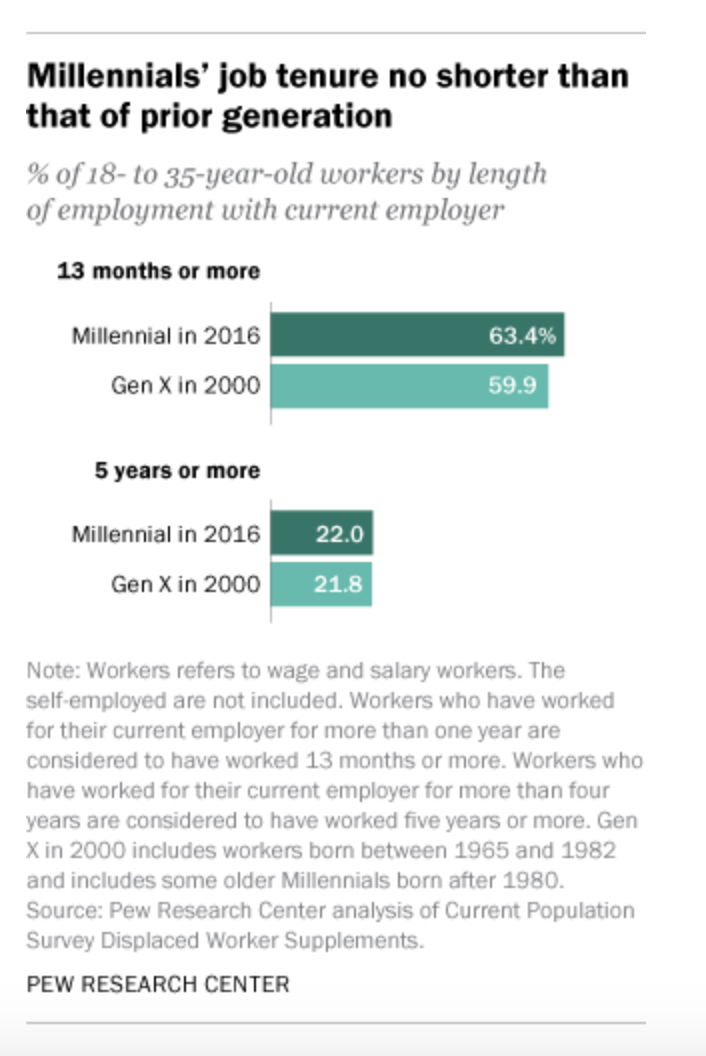 This turbulence has prevented or delayed Xers from establishing a more stable financial footing. According to Richard Fry of Pew, Gen X job-hopped more in their early careers than did Millennials at the same point in their lives. According to a 2012 survey conducted by Deloitte Consulting, only 37% of Gen Xers said that they plan on staying with their current employers once the economy improved, compared to 44% of Millennials and 52% of Baby Boomers.

So what if Xers are busy at work and taking care of their families? Isn’t that the same story for every generation? Did these stressors uniquely and solely shape this generation? Yes and no. Xers, since their youth, have been characterized as less optimistic and more cynical than other generations. First known as the “latch-key generation,” Xers grew up at the beginning of an era when hard work alone wasn’t enough to make ends meet. This was the first generation to experience first-hand that a college degree didn’t guarantee a middle-class paycheck. They grew up in the shadow of Watergate, Iran Contra, as unions and the middle class shrunk, resulting in both parents (in two-parent households) working full-time, leaving and Xers with more unsupervised time than kids of previous generations. Gen X learned to rely on peers and avoid “expert” advice. Their faith in government and economic institutions has always been shaky. 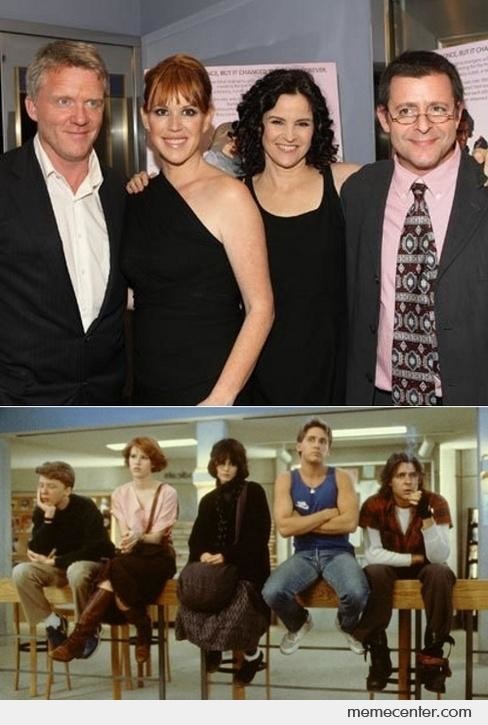 The cynicism and independence of their youth still impacts Gen X today. “Hacking Longevity” data shows that Gen Xers are the least hopeful cohort in terms of living to a ripe old age. Asked what age they want to live to, Xers on average want to make it to age 87. Seniors hope to make to 89, while the optimistic Boomers are shooting for 92.

And it’s not just a lack of optimism that characterizes Xers when it comes to thinking about their own longevity. Pessimism, particularly around health, is a significant Gen X theme. In fact, according to “Hacking Longevity,” Xers are the generation least likely to say that they spend time “thinking positively.”

This is a generation that thinks they won’t live long, yet they aren’t doing much to change this potentially self-fulfilling prophecy. Silents and Boomers report avoiding drugs and alcohol and reducing or avoiding stress more than do Xers. While some of these measures reflect differences in lifestage (it’s not surprising that people in their 80s are drinking less than those in their 40s) the pattern is clearly generationally rooted. For one, Silents didn’t experiment much with drugs in their youth (or adulthood). 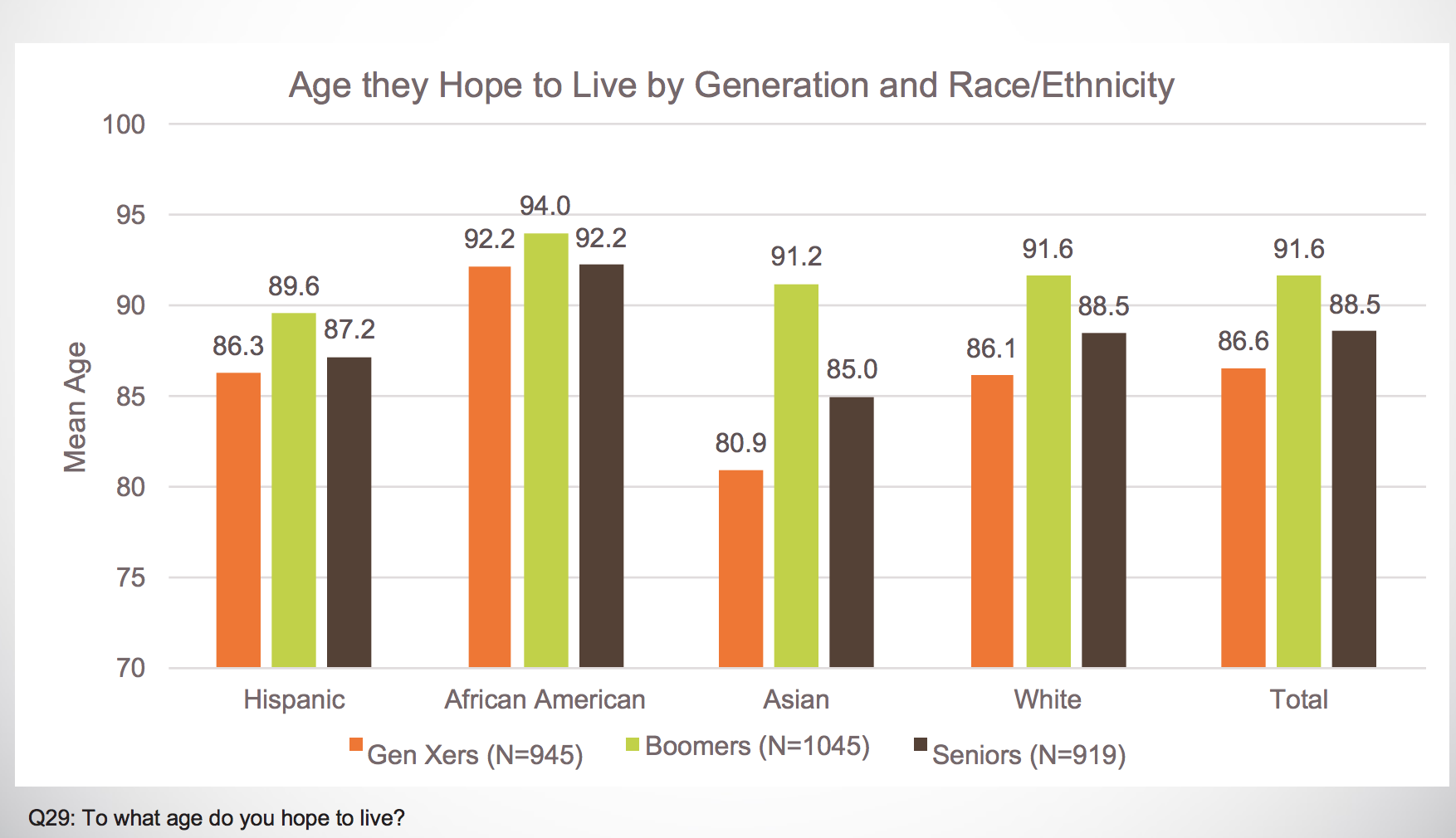 *Chart is based on data from "Hacking Longevity" 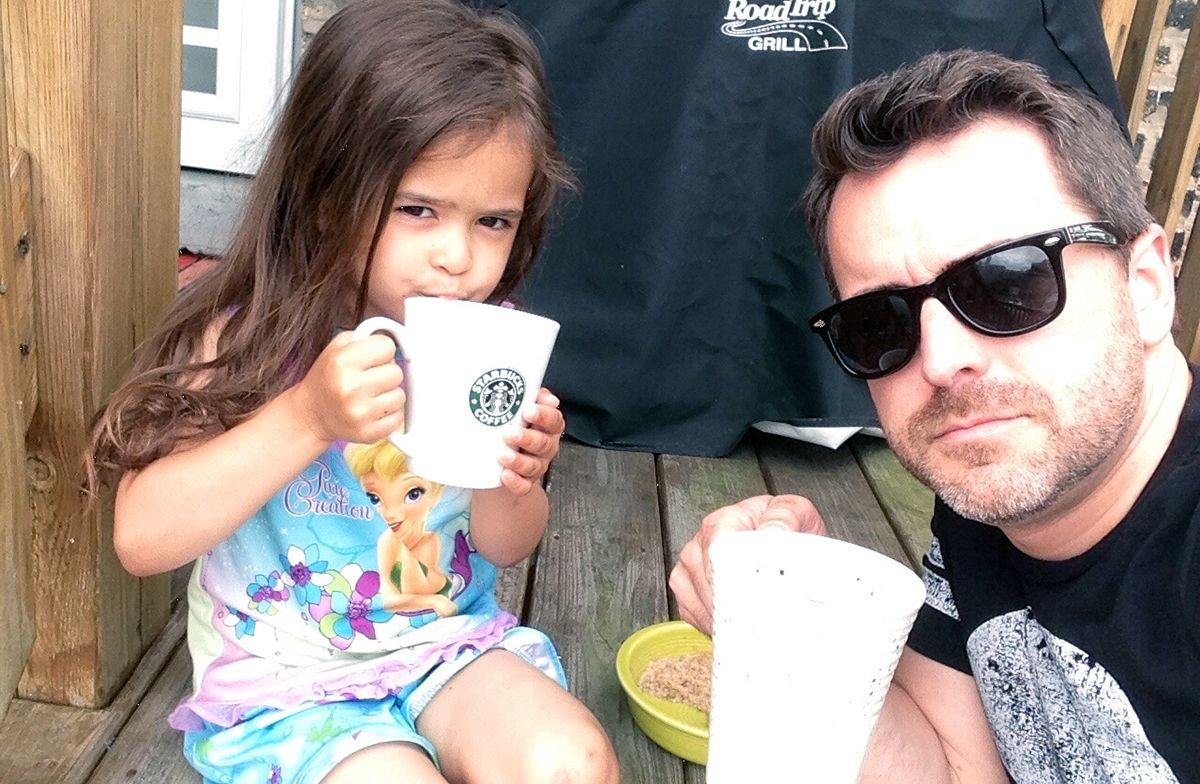 Because most Xers still have a 9-5 (and kids), they get less sleep than older generations. In fact, only 56% claim they “get plenty of sleep” compared to 68% of Boomers and 75% of Silents. Only about half (52%) of Xers claim (in “Generation Nation”) that they get “enough sleep,” resulting in Xers earning “the most sleep-deprived cohort” award. Even those youthful Millennials (58%) and Gen Zers (60%) say they get enough sleep.

Fewer Xers, compared to Millennials and Boomers, pay attention to what they eat and drink. While 88% of Seniors and 86% of Boomers say that they stick to a healthy diet, only 77% of Xers do. Only 57% of Xers have had a routine checkup with the doctor in the past year, compared to 73% of Boomers. According to a 2017 survey by healthcare provider MDVIP, only half of Gen Xers, compared to 72% of Boomers, have had an annual checkup in the last five years. The study also found that “one in three Xers avoid going to the doctor out of fear of finding something wrong. When they do go see a doctor, Gen Xers do not follow the doctor’s orders because it’s too much work and not a priority.” 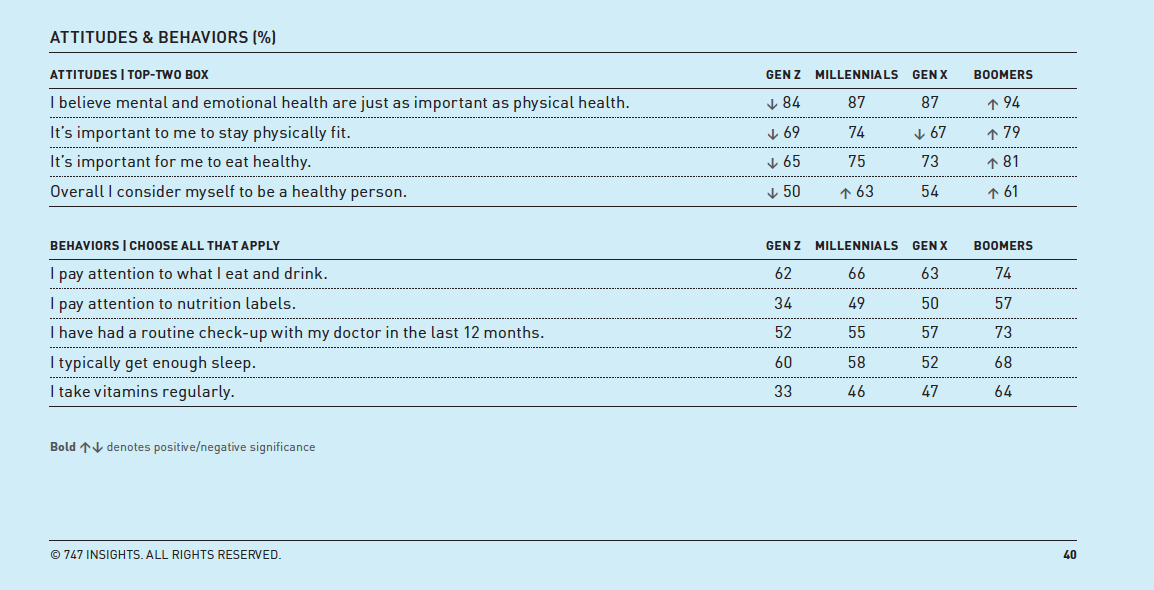 Clearly, health is not the biggest worry for Gen X at this stage in their lives. And they’ll be the first to admit it. “Generation Nation” revealed that Xers care less about being healthy than do the younger Millennials and older Boomers. Fewer Xers than other cohorts say that it’s “important to staying physically fit” and to “eat healthy.” While 61% of Boomers and 63% of Millennials consider themselves healthy, only 54% of Xers do. Both Silents and Boomers believe that “good health and fitness” is the top motivating force in their lives. For Xers, this goal fell to number-three, behind “financial security” and “enjoyment of life.”

With so much of their day spent at work and so much energy spent taking care of their children and parents, Xer’s aren’t left with much for themselves. Going to the gym, let alone crafting healthy meals and getting enough sleep, are squeezed out of their overbooked schedules. It’s not a shock to see that Generation X is tired, stressed, and a bit worn down. This generation is smaller than the Boomers and Millennials. And, as a group, Xers make fewer headlines than the Silents (i.e. The Greatest Generation) and now Gen Z. But that doesn’t mean they should be ignored.

Let's not forget this under-the-radar generation. These former slacker and latchkey kids are running the country while taking care of most of us. We’ve had one Xer as president and likely will get a couple more. So let’s throw on some Nirvana or Sonic Youth and help out an Xer this week -- a babysitter and guest-pass at your gym will go a long way.